A plan to make Qor a labyrinth experiance

If this sounds exciting, go to my post here: http://wizardgifts.wordpress.com/2013/04/19/top-secret-labyrinth-plan-leaked-manifesto-herewith/

So today I drew up a plan for a relatively simple structure at the back of the cafe. a second, ‘esoteric’ dining area, for the pilgrims of Love Beauty Truth and Freedom. (I KNOW they’re out there – they write something in the visitor’s book almost every day!)

What think ye? I will attempt a ‘Qorflow’ funding of this, if private investors not forthcoming (??:) The economics of it are simple: they pay $2-$5 at the door for the magical transformative experience that awaits them within. There will be coloured light, as in every self-respecting cathedral, in this case coded according to the symbolism of Blue = Love and listening, Green = Beauty, Novelty, Yellow = Truth, logic strategy; Red = Freedom (directed powerful expression of the strategy)

The main idea of the different tables is they can either move though them in turn or go to the colour/zone that attracts them most, there to mingle with others of like mind, with the instructions (in the free handbook that comes with the entry fee) to share and communicate as pilgrims ought. And to play the game of qor at the tables, which will all have the layout on them in full colour…

Or if they want to be intense alone, they sit in the smaller tables which surround the main one for each zone. Note the wrap-around seating for these ones.

Qor, the Game, now with rim to hold marbles

This is the result of thinking some more how to store the game, and the marbles. This model can be hung on the wall and the marbles stay inside the lip of the rim. Because it is for wall hanging it seemed to make sense not to provide a whole big box for it, to save cost and make it under? $20. The frame decoration is thorns from the Apples of Aeden, complete with qorstone. 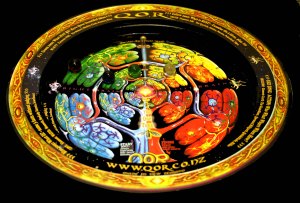 The card of Qor

At last Qor the Game is about ready to go out to the Cafe Eutopia and elsewhere!

here’s the card I did to go with it. Soon i will put up a photo of the game in full packaged splendour! 🙂

The Game of QOR: the evolution continues

I’ve been busy! The Game has now a version with five colours of marble, paper ‘rainbow money’ and three levels. The aim is to place all your marbles on the matching colours of the Tree, and each zone sub-zone and level has its score. The first to complete a full cycle in each zone and overall gets a bonus score. It really is a model of collaborative vs selfish strategies, and of the power of collaboration. You still get to win the most points as individuals or teams, so the urge is to compete is catered for too!

But that’s not quite ready yet. Meanwhile I’ve got a simple version ready to make and have for sale online and at Cafe Eutopia. Inspired by the idea that the Boy Raiders in my epic play a simplified version  of the ancient game of the Tree of Life (called Kor, or as they write it, QOR), I made a smaller, simpler board which can be played as a simple game of skill: roll the marbles of each colour onto the ‘dimples’ in the board in each colour zone. Adults can use it for thinking through questions, of course! And teach their children the principles.

Here’s the graphic of the QOR board:

here it is photographed in its gold and black laminated moulded paper ‘plate’:

I’ll demonstrate it at Eutopia and iron out any issues as I go – and listen for any new ideas, of course!

This book goes with the free glass bead PDF version of the Game which you can download here (see menu line above ) and print out in colour SRA3 size or whatever size you want, at a laser print shop.

Filed under developments on the Game, free ebook, free poster or game

A video of the prototype and the Hall of the Wheel

Wow, this is fun! I have just gone out there and tried it – it being this time uploading a video onto Youtube from my smartphone, taken just now with me holding the phone and talking and trying to demonstrate the marbles all at the same time. Wow! 🙂 Bear with me, this is my first video for Youtube done by moi. Here’s the link to it:

So the game has evolved fast, and I’ve gravitated to simplicity, with an open glass playing surface. The ‘Rainbow money’ tokens are next…

A diagram of any process

This is the current graphic for the Game, to be revised and then printed out here at New leaf bindery, ready to go into the special frames and fitted with magnetic disks to attract the steel marbles to each zone…

I am going to be busy to get the game in two sizes – a table seating four, and a 300 mm (1 foot approx) tabletop game – ready for the launch at the WOW! Walking Our Wisdom summit on the weekend of 17-18th March! For more on that event and movement see www.walkingourwisdom.wordpress.com.

as a manageable  PDF:

Filed under developments on the Game, Fractal process theory, Uncategorized

WOW! The Wheel of Wisdom is named

Hi! For a blogger this first post is a moment like an actor standing in an empty theatre when the play has just been announced, and he is to perform in it. Magic is in the air! There is no audience as yet in that silent space, but he can feel their future presence.

This blog is mainly about the Wheel of Wisdom creativity game as developed and about to be launched in 2012 at the WOW Walking Our Wisdom summit and celebration 17-18th March 2012 at Kawaipurapura – see www.walkingourwisdom.wordpress.com

But I do want to give you a little background, for the record. Skip the next paragraph or two if you aren’t into technical philosophy!

The evolution of the WOW Game goes back a year or two, but the concepts behind it go back for me to the heady days of 1990-5, when i was studying philosophy at Auckland university. I had just discovered C.S. Peirce, and was grappling with his intriguing ‘Tritism’ theory of process and the evolution of all entities. Then when my old school friend the reclusive Murray Munro told me a little about his fractal theory of the human being and other entities (which he called ‘hexaholomorphism’) I began to put together my own understanding of the fractal nature of all process. I tried adding two aspects – Input  and Output – to Peirce’s three (Novelty, Reaction, and Continuity) and noted many overlaps between the resulting five-aspectual diagram and Murray’s hexaholomorphic diagrams. (I dropped his sixth aspect – The World –  as not intrinsic to the makeup of the entity.) In my MA thesis, Process and Inquiry,  i tried to explore the many ramifications of aspectual theory to process philosophy and the process of inquiry in particular. I wrote it on a database, as a GEID or Global Evolving Inquiry Database’, as an experiment in organising an evolving system of thought.  It was all very ‘Green Zone’ (see the Game!) and the examiners, Western-Analytic yellow-zoners to a man, had no opinion of it and would not let me pursue my inquiries any further in their institution. Nevertheless i scraped up an MA before I was shown the door and departed for detox in the country, where i began to build cafe Eutopia www.eutopia.co.nz based on my process philosophy and the ideals of Love, Beauty, Truth and Freedom. Mainly this was an attempt to show the ideal of Eutopia in the architecture, which i hoped would lead people to seek the philosophy. This did not happen very much, and last year I finally ‘got’ that i must keep the main thing the main thing, and ‘come out’ with my actual philosophy in some form which all seekers of truth (and love beauty and freedom) can appreciate and benefit from. ‘Speak your truth and break, Zarathustra!’ So I have developed the Game, a form of the original fractal diagram of all process,  and cleared out the old church building  at the back of the ‘Ark’ where we live and have our book bindery. I renamed it the Wheel of Wisdom Hall. (before yesterday when the name was finalised, it was the Lifetree Hall and the New Leaf hall. New Leaf Network, which i began in 2011, is a co-op self-publishing and printing & binding movement). See www.newleafnetwork.org

So, now the Game is the focus of my communication of the ideas and ideals. (That and the fantasy epic, Apples of Aeden, in which i explore what an ancient civilisation based on love truth beauty and freedom might have looked like.) In the hall will be a few tables with the full-sized round table form of the game, so people can play it in sessions with me or others as the guides. or one on one, solving life problems with the Game. It will be a kind of school of life philosophy.

That is the serious side of the Game. Of course, with the magnetic marbles, dice, wands and rainbow money, it can be played by young children as a game of chance, dexterity, and colour, shape and pattern recognition. 🙂 and that is i think, a good thing!

Filed under Fractal process theory, Origins of the Game, School of philosophy